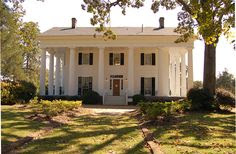 Visions of Scarlett O’Hara’s Tara from the movie Gone with the Wind or the famous Oak Alley Plantation sweep through ones’ mind when conjuring up those antebellum period plantations of the deep south for some. However, for the black race and people of color, plantation life in the 1700s and 1800s was a constant struggle just to stay alive. In The Last Timekeepers and the Noble Slave, the third installment of The Last Timekeepers time travel adventure series, eleven-year-old protagonist Drake Bailey must confront not only his demons, but the terrible oppression and cruelty against his race in antebellum Georgia.

When I researched these grand Southern homes for my novel, I found a few myths in this mired past. In movies, plantations were often depicted as ‘mansions’ with fluted columns and a broad porch; massive trees with their drooping limbs lining circular driveways, and finely dressed men and women parading their wealth for all to see. Um, no. There were a few plantations which fit this description, but these were the exceptions. Most plantation owners lived modestly and some even poorly. The overwhelming majority of slaveholders held less than twenty slaves. Yet, even if a man only held one or two slaves, he had considerably more status in southern society than a man who held no slaves. Status was everything to the South’s white population, and the more slaves a man owned, the more respected he was.

The plantation was a world in itself. I created the fictional Taylor Plantation situated near Athens Georgia, close to where my time traveling characters would land. Trying to keep the grounds as authentic as I could, the plantation was comprised of the slave owner’s house (the Taylors) which was called the ‘big house’, the line of single-room cabins dubbed ‘slave row’ where slaves called ‘home’, and nearby loomed the overseer’s house. Scattered about this plantation were various barns and sheds where animals, tools, and the harvested crops were stored. Surrounding everything were cotton fields and woods and situated in the back of the property lurked the slave cemetery by a winding creek. 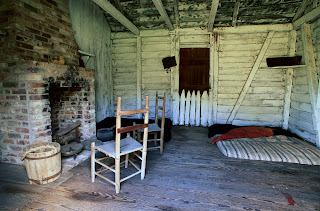 Curious on how plantations came to be? In the early 17th century, when the British colonized what
would later become the United States of America, the crown offered large plots of land to settlers as an incentive for them to journey to a strange and harsh new world. Many settlers who took the deal combined their properties into larger settlements—in the South, these eventually became plantations. As these landowners needed immense manpower to maintain the plantations, they turned to slavery, importing captured peoples from Africa as forced laborers.

Plantations operated relatively unfettered in the American South for more than 250 years; the Northern states, however, had all abolished slavery by 1804. Despite Congress banning the African slave trade in 1808, the domestic slave trade in the South continued until the ratification of the 13th Amendment in 1865, which banned slavery outright.

During Reconstruction (post-Civil War years), the plantation system collapsed. While some plantations were destroyed, many were subdivided, with both black and white farmers leasing these smaller plots as sharecroppers (who would give a portion of their harvest to the landowner as ‘rent’) or tenant farmers (who paid rent). These farming practices continued through the mid-20th century until the Great Depression and advancements in farming technology got rid of traditional plantations for good.

Many people descended from African American slaves consider plantations to be the American version of Auschwitz. They’re not wrong. Filled with echoes of death and despair, Southern plantations—many of which are in disrepair and decay—are places where slavery made the romanticized southern lifestyle possible and continue to carry their dark legacy to this day.

True freedom happens only when you choose to be free.

Eleven-year-old Drake Bailey is an analytical thinker and the genius of the Timekeeper crew. However, no logic or mathematical acumen can change the color of his skin or prepare him for this third Timekeeper mission in antebellum Georgia. To survive, Drake must learn to play the role of a plantation slave and when confronted with the brutality, hatred, and racism of the deep south, he’ll have to strategically keep one move ahead of his sadistic captors to ensure his lineage continues.

In a dark world of Voodoo, zombies, and ritualistic sacrifice, the Timekeepers must ensure a royal bloodline survives. Can Drake remove both literal and figurative chains to save both himself and a devout slave girl from a terrible fate? If he can’t summon the necessary courage, humanity could stand to lose one of its greatest leaders.

Here’s a glimpse of the premises of both my young adult series:

Chosen by an Atlantean Magus to be Timekeepers—legendary time travelers sworn to keep history safe from the evil Belial—five classmates are sent into the past to restore balance, and bring order back into the world, one mission at a time.

Imagine a teenager possessing a psychic ability and struggling to cope with its freakish power. There’s no hope for a normal life, and no one who understands. Now, imagine being uprooted and forced to live in a small tourist town where nothing much ever happens. It’s bores-ville from the get-go. Until mysterious things start to happen.

The Last Timekeepers and the Noble Slave, Book #3

The Last Timekeepers and the Dark Secret, Book #2

The Last Timekeepers and the Arch of Atlantis, Book #1

Legend of the Timekeepers, prequel

Lost and Found, Book One

Sharon Ledwith is the author of the middle-grade/young adult time travel adventure series, THE LAST TIMEKEEPERS, and the award-winning teen psychic mystery series, MYSTERIOUS TALES FROM FAIRY FALLS. When not writing, researching, or revising, she enjoys reading, exercising, anything arcane, and an occasional dram of scotch. Sharon lives a serene, yet busy life in a southern tourist region of Ontario, Canada, with her spoiled hubby, and a moody calico cat.