Not only is Emma Lane an accomplished Regency author, she is also a marvelous cook. Settle back and enjoy Emma’s two treats in one, her delicious Chocolate Raspberry Parfait and a peek at her latest book Tutored by a Duke which is now available for pre-sale. March 18 is the official debut. And I can’t wait to get my copy!

Okay, Emma, the kitchen is all your. Work your magic!

Hi Everyone! This dessert is easy, but elegant. Chocolate pudding made the day before is layered with marinated raspberries and whipped cream. This recipe serves one, so repeat the process for each guest.

Place one raspberry on top and serve or chill for later. If the layers tend to run a bit, don’t worry. Just looks more decorative and creative.

Now while your dessert is chilling, I want you to search deep into your memories. Can you recall an incident where your mother told you distinctly NOT to do that thing or you’d be sorry? Of course, you did it anyway, and she was exactly right. Mothers were always on our side, but it took a bit more age and wisdom to figure it out.

One stands out for me. My mom told me emphatically NOT to buy that expensive, pale pink bathing suit. I thought it sophisticated and made just for me. Surely I knew best.

I spent the rest of the summer wearing my old one. That beautiful pink suit, when wet, was a see-through which the boys loved a bit too much. Mom never said a word, but I remembered her advice every time I squeezed into my old suit. To this day, there’s a fellow who gets a gleam in his eye at the class reunions and reminds me of ‘the pink suit’ episode. Glad I figured prominently in his teen fantasies. Not.

Tutored by a Duke is a Regency Romance with a sweet rating. The story is a hilarious romp as the younger set struggles to find their places in society.

Elisabeth is a lively young lady ripe for adventure. She’s lived the sheltered life of the privileged during the Regency era of the 1800’s and is on the cusp of entering society when she joins her older sister at a house party. On the enormous estate in the spreading mansion of a duke, she mistakes her host for the fat squire down the road. Thus begins an adventure which is against all her training. She knows her mother would not approve. Was that half the intrigue of meeting a stranger in private?

The handsome but incognito Richard Hawlester, Duke of Roderick, weary of toad-eating house guests, engages in a serious flirtation with young Elisabeth Barrows, who is primed for an exciting adventure. Mistaking the fat squire for the duke, she holds her secret relationship with a man known only as Richard, Nobel Rescuer, close to a tender heart while discovering love for the first time.

Elisabeth’s trust seems irrevocably lost when the duke’s actual identity is revealed. Realizing his mistake, Roderick begins an earnest, dangerous, and often hilarious campaign to convince her of his love. Elisabeth ponders whether true love can overcome the loss of trust between two people, even as danger presents in the guise of a vile, undesirable suitor, while a wicked assassin makes an attempt on the life of the duke. Trust broken can never be regained, or can it?

What does one wear to a secret assignation?” she wondered, smoothing her gown. When her maid entered the room, Elisabeth dismissed her with the same excuse of a headache. She actually made ready to put her head on her pillow until the maid left. She laughed quietly to herself and felt somewhat guilty. It was almost impossible to stay still with her heart thumping hard in her chest. After waiting for what seemed to be hours but was in reality mere minutes, she sat up and smoothed her hair, despairing of the wisps of curls that always escaped her efforts to tame them.

The guests were gathered in the front parlor, but she peeked carefully out the door just in case. She would make her way by the back stairs, which she hoped would lead her to the garden. Quickly she descended and stepped, as she suspected, directly into the beginnings of the garden. Statues of various gods loomed whitely in the twilight. The tinkle of running water alerted her of the nearness of a small frog pond. She knew her way from there and walked confidently forward. She almost screamed when an arm reached out and encircled her waist.

“Shhh…little one. It is only I, Richard, your Noble Rescuer.” He laughed softly and rubbed his face gently in her hair as he held her close. She twisted around to look up into his eyes but could not read his thoughts in the dim light. He released her and caught her hand, pulling her gently with him around the hedge and back to that private floral bower, borrowed once more from their host.

At his urging, she settled on a white garden bench which nestled against a flowering vine. Heady night fragrances enveloped her as she looked up into the handsome face of her friend. He gazed back at her but then paced a step or two back.

“I have things to say, sweetness. Please do not be upset when I use words I know are improper. Let us be two different people for tonight. What say you?” He stepped closer, but still did not join her on the bench.

Elisabeth waited for what she knew not. She was content to be this close to one for whom she had such feelings. She nodded. Why did she trust him so implicitly? She only knew she did. Perhaps it was because she enjoyed an enchanted night in a magic room with a handsome man who called her pet names. This was not real life, but she could not give up the thought that magic existed, especially for those who were in love. Surrounding her was a fairy garden which glowed with moonlight under the watchful eyes of stone guardians. Perhaps they came to life when the sunlight faded?

She inhaled sharply and clasped her hands together in her lap when he settled himself on the bench, their shoulders touching. His unique scent wrapped around her, causing her head to spin with excitement. As he turned toward her, he reached out with his arm, first touching her shoulder with his hand, and then folding around it. She did not stop herself from leaning toward him, although briefly she did try. The prickling of her conscience was like a buzzing, annoying gnat she could easily dismiss. Elisabeth was mesmerized by an intoxicating spell she never wanted to end. Richard leaned closer pulling her gently forward. 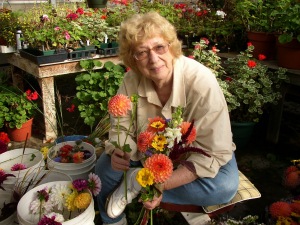 Emma Lane is a gifted author who writes under several pen-names. She lives with her patient husband on several acres outside a typical American village in Western New York. Her day job is working with flowers at her son’s plant nursery. Look for information about writing and plants on her new website. Leave a comment or a gardening question and put a smile on Emma’s face.