Fill your home with the beautiful aroma of fresh baked coffee cake. This recipe is easy and oh so tasty you’ll want to make it often.

In a large bowl, combine egg, milk, and oil. In medium bowl combine flour, baking powder, salt, and sugar. Stir contents of both bowls together.

Bake for 18 – 23 minutes or until a toothpick inserted near the center comes out clean. Cool on a wire rack.

In a small bowl, combine the glaze ingredients then drizzle it over coffee cake.

Why not read a good book while you enjoy your warm coffee cake and favorite beverage? May I suggest one of the books from my LitRPG series The Revelation Chronicles? ?

In Starter Zone Cami kept herself and her younger sister Alby alive in a post-apocalyptic world, facing starvation, violence, and death on a daily basis. Caught by the military and forcefully inscribed, Cami manages to scam the system and they enter the Realms, a Virtual Reality world, as privileged Players rather than slaves. They experience a world of safety, plenty, and magical adventure.

In the Traveler’s Zone magic, combat, gear scores, quests, and dungeons are all puzzles to be solved as Cami continues her epic quest to navigate the Realms and build a better life for her family. But an intrusion from her old life threatens everything she has gained and imperils the entire virtual world.

Time to play the game.

Above the tree line floats an airship close to three hundred feet long with a slightly rounded wooden hull. Ropes attach the lower portion of the ship to an inflated balloon-like aspect, bright white in color with an identification symbol, a red bird with white-tipped feathers extended in flight, inside a round yellow circle in the center of the canvas. The deck is manned with archers and swordsmen. There are two sets of fore and aft catapults.

What I don’t see are cannons or any other type of a gun large enough to account for the sound of the explosion.

The ship pivots in the air, coming around to point directly at what looks like an oncoming flock of five large birds. Or creatures. They are too big and too strange looking to be birds. They drift closer, flapping their wings.

A moment passes before I realize that they are not creatures either. They are some sort of gliders. A person hangs below each set of the feathered wings, which flap and move with mechanical precision in a sky washed out by the morning sun.

The archers nock their arrows and aim at the flock.

The gliders draw in their wings and dive toward the deck, covering the distance in a few heartbeats. Most of the arrows fly uselessly past the attack force and fall like black rain from the sky. The archers aimed and released the volley too late.

The forward catapult releases a torrent of small rocks at the lead glider. It is a scatter-shot approach that proves effective. There are so many missiles that it is impossible to dodge them all.

But at the moment the stones strike, the other four let loose with fireballs. Spheres of crackling flame spring from their hands, glowing faintly at first and then with increasing brightness. The balls of fire shoot from their hands like bullets from a gun and fly toward the ship, exploding. Pieces bounce off the hull and fall to the ground, throwing hissing, burning globs of magic-fueled fire in all directions, setting everything they touch aflame.

Want to learn more about The Revelation Chronicles? Click HERE for updates on this and the other series by Chris. Watch the video on YouTube. 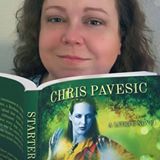 Chris Pavesic is a fantasy author who lives in the Midwestern United States and loves Kona coffee, steampunk, fairy tales, and all types of speculative fiction. Between writing projects, Chris can most often be found reading, gaming, gardening, working on an endless list of DIY household projects, or hanging out with friends.

Learn more about Chris on her website and blog.